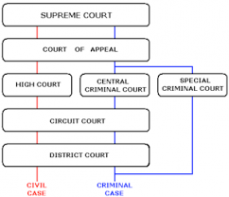 All the arrested person whose cases were examined by Amnesty International who have been charged face trial in the Special Criminal Court. In many of these cases trial is still pending.

Amnesty International is concerned at the attitude of the Special Criminal Court in relation to the rules of evidence where there are maltreatment allegations. The former Minister For Justice, Mr. Cooney, stated in the Dail on 18 February this year in reply to allegations of police maltreatment which had appeared in the press:

“It is the law that no statement made by an accused person may be admitted in evidence if it was not a voluntary statement. This means that the statement must not have been obtained as a result of physical pressure, or a threat or an inducement. If any question is raised as to whether a statement was voluntary the onus or proof is on the prosecution and in any case of doubt the statement is inadmissible”.

ONUS OF PROOF SHIFTED TO PRISONERS

The Special Criminal Court has rarely dismissed a case on the grounds that the prosecution failed to establish beyond doubt that statements were voluntary but has thus far appeared consistently to accept police testimony as against that of the accused. From an examination of several cases appearing before the Special Criminal Court in the past it appears to Amnesty International that, despite the standards proclaimed by the former Minister for Justice, the onus of proof has in effect been on the defence to establish beyond all reasonable doubt that maltreatment did occur rather than on the prosecution to prove that it did not.

The above, in Amnesty International’s view, is borne out in the ruling on the admissibility of statements in a case before the Special Criminal Court concerns persons arrested and detained under Section 2 of the Emergency Powers Act and the court stated that it “found it necessary to scrutinise the admissions with extra diligence because each of the accused was in police custody for a long period and during the night”. Three of the four defendants had signed self-incriminating statements within 24 hours of their arrest; they alleged that they had been severely maltreated and threatened by the police soon after their arrest and that this had led to their eventually signing statements.

Evidence to support the accused’s claims of maltreatment included testimony from a police detective that he had witnessed a cut and what appeared to be fresh blood on the face of the accused and, in the case of another of the accused, from a prison doctor who had stated that injuries the accused received were consistent with having been assaulted and not, as the police maintained, with having fallen down stairs in the police station. Other evidence produced by the defence included the fact that a police photograph of the defendant alleged to have been the most badly injured was of poorer quality than photographs of the other defendant, being the only one taken without a flash bulb, and other photographs of the same defendant were missing.

There was clear evidence that the person who the police claimed had fallen down stairs was injured by some means while in the police stations. None of the accused had seen a solicitor until after they had signed statements. All had been detained for five days before having been brought to court.

The Special Criminal Court in its ruling of 21 June 1977 on the admissibility of their statements entirely rejected the evidence put forward by the defence and accepted the testimony of police witnesses who denied that any brutality, threats or inducement had taken place. The mission’s delegates have made the following observations on the court’ decision:

a)           The court accepted police claims of privilege with regard to police practice in taking photographs when the police photographer stated that it was not usual practise for negatives to be destroyed. The defence has strongly objected when the court did not pursue this matter further, because the police were unable to explain satisfactorily why a flash was not used in one of the photographs, or to give other examples of the claimed practise of destroying some negatives.

b)           The court accepted the view of a police doctor that the defendant had fallen down a flight of stairs in the police station although the doctor failed to identify some injuries later discovered; in doing so the court also disregarded a more detailed report given by the prison doctor who examined the defendant on admission to prison and who gave some concrete medical reasons why in his opinion the injuries could not have been caused by falling down stairs. The court attached considerable weight to the fact that at his first medical examination that the accused told the police doctor he had fallen down stairs, although he claimed that he made this statement under a threat and that a police officer was standing in the doorway during the first medical examination.

c)         The court decided that the consistency in police testimony was a mark of the truth of police testimony and attributed consistency in the defendants’ testimony to a ‘criminal conspiracy’ on the part of the accused to defame the police. Similarly the Court found that contradictory aspects of police testimony ‘were minor but understandable discrepancies’ that ‘may readily arise and have no sinister connotation’, while inconsistencies in the testimony of the accused (such as the colour of the solicitor’s notebook) during his first visit to one of the defendants after arrest and interrogation) detracted considerably from the credibility of their allegations.

It is the view of Amnesty International delegates that while it may not be possible to establish beyond a reasonable doubt the truth of the allegations of brutality, the evidence of maltreatment was in the case of sufficient weight to at least raise doubt as to the statements being voluntary. In the delegates’ view the prosecution failed to eliminate this element of doubt.

While aware that much of the assessment of the evidence described above depends on the discretion of judges and does not raise matters of legal principle, it is the view of the delegates that on balance it cannot be stated with confidence that the Special Criminal Court strictly applied the principle of law that lays the onus on the prosecution to prove the statements were made freely and voluntarily. Much of the evidence was of more than one inference and was probably finally interpreted on the basis of a propensity to accept the truth of one party as against another.