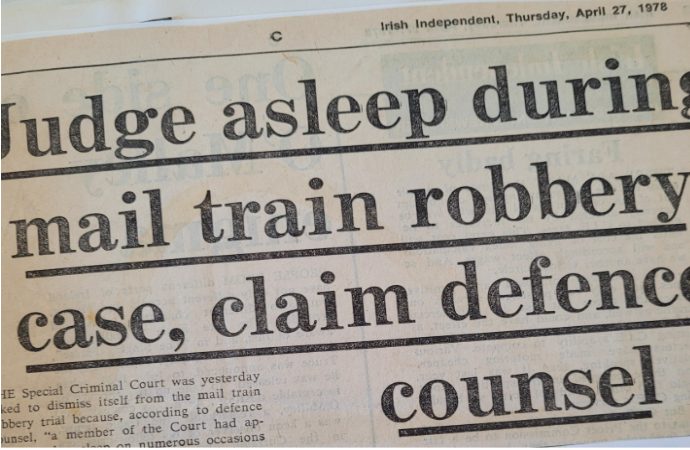 One of the three judges trying the Sallins Case regularly fell asleep during the trial.

This farce was first raised by Hibernia, a respected weekly review, not long after the trial opened. Hibernia returned to it some weeks later after another visit to the trial. John O’Connor, once an ex- Fine Gael candidate but now a Circuit Court Judge,

‘…seemed to be having difficulty staying upright in his chair, his eyes were closing and his head was slumped forward…(another judge) seemed to try to make an unsuccessful effort to rouse him… his head had dropped to within 6-8 inches off the bench in front of him..’

Lawyers for the defendants, Breatnach, Kelly, McNally and Plunkett, asked the judges to stop the trial because of the Sleeping Judge issue. They refused.

The trial continued and when court clerks noticed he was asleep heavy books were banged or court doors banged shut. The presiding judge closest to O’Connor used his elbow or kicks under the bench. All to no avail.

On Day 50 of the trial, lawyers for the Defence raised the matter in open court and to the media, inviting the court to discharge itself or to invite the High Court to judge the matter. They offered to call evidence to back up their complaint. The three judges (which included the Sleeping Judge) said they would not hear evidence and that they would retire to discuss the matter.

They returned to rule that all three judges were perfectly able to function as judges according to their oaths of office and that the trial would go on: in effect that the Sleeping Judge was not sleeping.

Defence lawyers took the Sleeping Judge issue to the High Court, with eight sworn affidavits from solicitors, barristers, defendants, journalists and members of the public. High Court President Thomas Finlay (ex-Fine Gael TD) refused to halt the trial:  the delay in taking the case mitigated against the application; the SCC trial court had ruled the judge was not asleep and that, as a matter of law, could not be overturned….  Lastly, if the application was granted to stop this trial, it was likely that no future trial would take place at all.

The Supreme Court heard a similar application a few days later, headed by Fine Gael member and ex- Fine Gael Presidential Candidate Chief Justice Tom O’Higgins. In brittle exchanges, they refused to formally hear the application, demanding and berating the Defence Lawyers for making the application at all. They echoed the arguments already made in refusing to make an order.

The trial continued and when court clerks noticed he was asleep heavy books were banged or court doors slammed shut….

By this stage, nine judges had backed the ‘finding of fact’ that The Sleeping Judge was not sleeping, throwing out the legal maxim that Justice not only has to be done but has to be seen to be done!

One can imagine, that on being woken to hear the Supreme Court’s verdict, the Sleeping Judge would have nodded, observers unsure if this was in agreement with the result or whether he was falling asleep again.

Breatnach, one of the defendants, contemplated responding to this surreal situation by theatrically producing a dead parrot in court. This referenced the famous Monty Python sketch where a customer returns to a pet shop to complain that the parrot he purchased the day before is dead. We see the parrot hanging upside down on a perch, dead as one of his erstwhile relatives, the Dodo. The salesman insists he’s not dead. ‘He’s only resting.’

Events intervened to scupper the protest. Not only was the judge sleeping, but he was also dying. After his death, it transpired he was on heart medication, of which one side effect was severe drowsiness.

The Sallins Men were retried and, despite protesting their innocence and denying the garda statements were theirs; despite evidence of torture, illegal and unconstitutional arrests and garda perjury, all were found guilty and sentenced to 33 years penal servitude.

Most Gardai in the case were promoted. The trial judge was appointed Chief Justice of Ireland.

Every government, so far, has refused to hold an impartial public inquiry, contrary to international law.

Below is the Dead Parrot sketch by Monty Python. Our reference to the Dead Parrot is to compare the Special Criminal Court, The High Court and the Supreme Courts’ refusal to accept the evidence that the Judge was asleep. It also references Dead Justice in the Sallins Case, which the State’s salesmen refuse to accept.